The origins of CADCO go back to 1968 when Coop was living on a work assignment on St Croix in the U.S. Virgin Islands (KV4FU - not a joke! - while there). WSVI, a very local channel 8 TV station living on drip fed month’s old Kinescopes. Channel 7, WRIK, San Juan (Puerto Rico) - 100+ miles but ideally across water. Coop wanted channel 7 but alas local channel 8 made that impossible. To the drawing boards. Back stateside an exec from IT&T (International Telephone and Telegraph) had pre-sold their telephone division (operators of the telco services for PR and USVI) that Coop could create a videotape fed CATV service by using newly developed Ampex and Sony VTRs to tape U.S. network shows in Miami and airlift them down to a “master headend” possibly in San Juan. There, 12-24 hours delayed for showing,  a microwave network (to be designed much less built!) would head to St Thomas, St Croix and further east. The concept was not quite as crazy as it may sound -  a chap named Lee Holmes would actually make such a tape delayed CATV network function on Guam just years later feeding TV channels from Los Angeles via air lift. YES dear reader - satellites would permanently fix this craziness!

CADCO? Coop was distracted from the work “assignment” by the WSVI/WRIK challenge. And he would carry his challenge back to Oklahoma City in April 1969 where with better access to resources and hardware CADCO was born. The problem was easily delineated with with Oklahoma City resources - eliminate one channel (such as WKY-TV channel 4) and drag in a distant channel 3 (KARD-TV Wichita 150+ miles). Simple stuff for a two decades-plus experienced TV DXer. First, large antenna (see photo here). Second, get rid of channel 4. Third, amplify the weak channel 3. The IPA (Interdigital preamplifier) was born, one circuit board at a time over 15 months in the garage at 6221 Norman Drive with the results appearing in two sizeable reports (Ham Radio Magazine; selected pages only shown here). The first commercial device was shipped to television station KTEN (Ada, Oklahoma; photo here) in July 1970 and from there it was hell-bent-for leather. 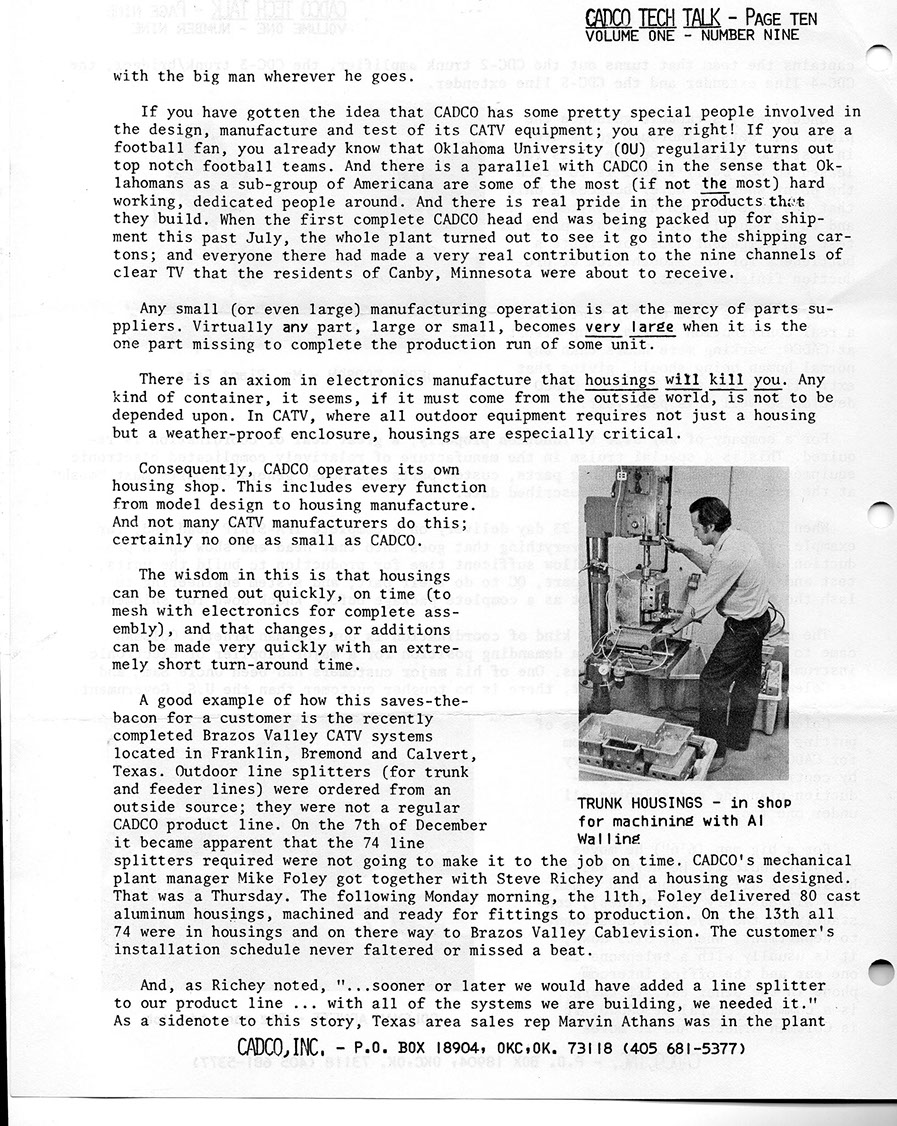